Amane Kuze is a non-hostile female spirit in Fatal Frame III: The Tormented that helps Miku Hinasaki and Kei Amakura uncover the truth behind the Manor of Sleep. Being one of four handmaidens, she was tasked with caring for the current Tattooed Priestess, Reika. Amane was the only one of the handmaidens related by birth to the Kuze name. She was the daughter of Kyouka Kuze and an unknown outsider, and was chosen by the Kuze family head to be the first handmaiden of her generation.

Amane wears the garb of the Kuze handmaidens; a red Hakama and a white Haori. Her hair is tied into pigtails and she is the least violent of the four pacifiers as they appear before the protagonists. She is also the only pacifier that does not carry her stake and mallet whenever she appears within the manor, and thus never attacks the player.

Amane is one of the four handmaidens appointed to serve in the Kuze Shrine. She served under and cared for Reika, the woman who was to be the Tattooed Priestess. Amane is the only one of the Pacifiers who was an actual member of the Kuze Family, and was also the first of her generation to be chosen.

She was the daughter of Kyouka and the half-sister of Kaname, Reika’s lover. Kyouka had an affectionate relationship with a visiting folklorist named Akito Kashiwagi. This produced a forbidden son, Kaname, so Kyouka sent the child away to a nearby village. Shortly before this, Akito disappeared. A few years later, another man was brought to Kyouka and this time she bore a daughter by him, who was Amane.

Most of the time Amane helps the protagonist by showing the way and leaving clues.

Amane seems to have been the kindest of the Handmaidens. In her diary, she recalled how her mother told her she had a brother, but her mother told her not to tell anyone. She and Reika seem to have talked a great deal while Amane was taking care of her, and Amane wrote that she was happy to help diminish Reika's pain. It seems that she cared about Reika. She also wanted to help Reika and Kaname to meet again, although it was forbidden.

Of the four handmaidens, Amane was also the least attached to her responsibilities. She had formed a friendly relationship with Reika, who told her of her lover Kaname. Once she had learned from her mother that Kaname was her half-brother, she tried a lot to aid him in seeing Reika, wishing it would ease Reika's pain. By letting him into the manor, however, she had broken the rules of the house.

She helped Kaname make his way into the Chamber of Thorns, the shrine within the mountain where the Impalement Ritual takes place, to see Reika (the tattooed priestess). This was expressly forbidden, and as soon as the Kuze head found out, she pursued Kaname to stop him. Amane felt guilty for this, thinking she was wholly responsible for anything that would happen to Kaname. Amane was ordered to be punished for her transgressions, and she was impaled at the bottom of the abyss by the other three handmaidens and was the first handmaiden to die by the impalement.

Amane is not a violent spirit in the main storyline, rather she asks for the protagonist's help. She is, however, available to fight in one of the game's optional missions. She appears after the other handmaidens are defeated, and fights in an identical manner. 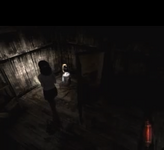 Amane behind the bars 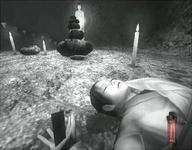