Kunihiko Asou was a brilliant occult philosopher and scientist who lived during the late 1800s and early 1900s.

Dr. Kunihiko Asou primary fields of interest were Japanese folklore and the spirit world, but his studies covered a broad field, and he was also a Doctor of engineering and a psychiatrist. He seemed especially interested in conducting research on the border between life and death, presented through dreams. The academic world, however, shunned both him and his research.

Working together with one of his ancestors, Dr. Asou took the latest Western technologies that were introduced to Japan and modified them in an attempt to create devices that could capture supernatural phenomena. These technologies included the Camera Obscura, the Projector, and the Spirit Stone Radio. His research and development in these technologies came to be known as "Mystical Science". He intended to use these devices to produce absolute proof of the existence of the spirit world.

Kunihiko Asou grew up on Mt. Kagiroi. When he was a child, he was friends with a girl named Shiragiku that everyone shunned because of her white hair and red eyes. Later, she was chosen to be sacrificed in the ritual which took place on Mt. Hikami, she chose Kunihiko to be her partner in the Ghost Marriage ceremony. During the ritual, he cut off a strand of her hair as a token, promising he would return, but later he suppressed the memory and failed to keep his promise. The lock of hair was passed down in a branch of the Asou Family, where it was eventually found by his descendant, Ren Hojo.

While conducting research into a mysterious sickness affecting psychiatric patients, Dr. Asou came across a subject that clearly described experiencing contact with the "Other World" in his dreams. This test subject was Kaname Ototsuki. One night during his stay, the subject left suddenly without gathering up any of his luggage. Amongst the things he left behind was an earring made of echo stone, which was believed to communicate by thoughts.

Dr. Asou used this earring to modify the crystal receiver in a radio. Dr. Asou explained that the radio utilized the special wave detection property of crystals to pick up the appropriate band wavelength. He chose stones in his experiments, because since ancient times, stones were known to carry occult properties. Dr. Asou believed if a person wore a crystal for a long time, their thoughts would remain within, creating a special type of crystal, which his colleagues eventually called Spirit Stones. Once a Spirit Stone was placed into the radio's circuitry, the radio would replay words that were spoken in the past and the voices of ghosts that were contained within the stone. This was his first experiment to bear fruit; he was able to capture sound at a range outside that of normal broadcasting. The radio was able to receive supernatural sounds and voices from the spirit world that could normally not be detected. He called the modified radio the "Other World Crystal Radio Signal Receiver", otherwise known as the Spirit Stone Radio.

After that, Dr. Asou developed a camera prototype that was able to photograph visions of the past and spirit entities that couldn't be seen by the naked eye. He took a camera, which was still considered a rare item in those days, and added a special lens and film to it. He came to call this camera the Camera Obscura. He recognized the potential the camera had in proving the existence of the spirit world. The first prototype that Dr. Asou considered successful was handed down in the Asou Family, though he had not then been able to test its powers. He knew these prototypes didn't fully utilize their potential and he strove to create a better Camera Obscura. Before doing so, he developed a special projector using the same principles behind the camera. The projector would project special images captured on film that originally could not be seen when they were photographed or on conventional equipment.

One day Dr. Asou was visited by a good friend of his, Seijiro Makabe, who planned on taking a trip to Minakami Village. Makabe told Dr. Asou that he was hoping to photograph the rumored Forbidden Ritual that occurred there. Hearing this, Dr. Asou lent Seijiro the Camera Obscura prototype and Spirit Stone Radio and wished him luck on his trip. He would never see his friend or equipment again. Some time afterwards, Dr. Asou began developing another Camera Obscura.

When he invented the prototype of the Camera Obscura, it was heard of the inhabitants of Mt. Hikami. They invited Kunihiko to take a photograph of the shrine maiden, Ose Kurosawa. He arrived at the House of Joining, but when he saw Ose dressed as a bride, he instantly fell in love with her, and she with him. They never voiced their feelings, but an unspoken vow passed between them. Kunihiko left the mountain with her photograph, containing a small piece of her soul.

He travelled all over Japan searching for a way to perfect the camera, and spent time on Rougetsu Island at some unknown point, conducting research about the Other World and the power of the island's sacred masks. He was also permitted to view the performance of the Rougetsu Kagura, escorted by Tsukimori Shrine Maidens. His studies of the island and its beliefs enabled him to create a special film plate, and it was here that he truly began to believe in the Camera's exorcising power. In return, he donated a single Camera Obscura to the island's collection. It was kept in a special museum, along with many other items relevant to occultism.

He was said to have died unexpectedly under unknown circumstances. Makabe's apprentice, Ryozo Munakata, published Makabe's final book some time after the incidents at All God's Village, in which he reveals that Asou visited Himuro Mansion, having heard that there was a special item called the Holy Mirror in the Himuro area and wrote in his diary that he had decided to visit the area. He was never heard from again. An unidentified male torso with arms, legs, and head ripped off, was discovered in the area, possibly hinting at his fate. The exact purpose of his visit is never stated, but it can be assumed to have been for testing his latest camera — as it is left behind in the mansion where Mikoto Munakata receives it some years later — as well as investigating and utilizing the Holy Mirror, a major component of the camera. After his death, several more prototypes were discovered.

Asou's death meant that the principles behind his devices would remain a mystery forever. The documentation of the sounds that the Spirit Stone Radio projected were also lost over time. The products of his research - the Camera Obscura, the Spirit Stone Radio, and the Projector - were sought after by enthusiasts and were soon scattered throughout all of Japan. Furthermore, despite the fact that most of the main characters in the series are his descendants, they are completely clueless about his works, his identity and even the origin of the mystical camera they carry through their journey. 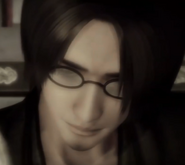 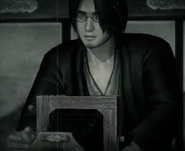