Fatal Frame is an upcoming Hollywood horror movie based on the Fatal Frame series. The movie's announcement was reported by the Famitsu website on April 22, 2014. [1]

Production for the film will start after the current project is done. The project consists of a manga (26 chapters published, ongoing manga), a novel (published), a Japanese movie (released) and the game series' fifth installment (released).

Producer Samuel Hadida announced to be the producer of the movie via a Niconico video stream on July 15, which was confirmed on July 17 during a special Fatal Frame event. Hadida was previoulsy the producer of other movie franchises also based on survival-horror game series, including the five Resident Evil movies and also the two Silent Hill movies. [2] 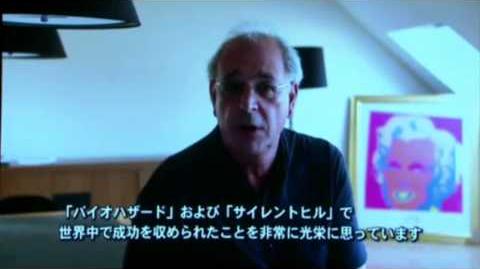 Fatal Frame Hollywood Movie Announcement Video
Samuel Hadida announces he will be the producer of the movie.

Retrieved from "https://fatalframe.fandom.com/wiki/Fatal_Frame_(Hollywood_movie)?oldid=32548"
Community content is available under CC-BY-SA unless otherwise noted.