The Handmaidens (鎮女), also known as the Pacifiers, are young female spirits in Fatal Frame III: The Tormented.

Handmaidens in traditional Japanese culture are attendants to the given shrine priestess and help give emotional and physical support as she took upon the 'piercing of the soul'.

Handmaidens were taken from the Kuze family or adopted from the surrounding areas. The family head themselves would give the handmaidens a thorough education. At any given time, there are always four handmaidens, representing the four cardinal directions, and they should be between 5 to 9 years old. In the Japanese version, they are called 'Pacifiers' as they pacify the priestess during her trials.

Each maiden wears the traditional dress of a priestess: white and red with a tassel hanging from their obis. Their hairstyles differ as well as carrying hammers and stakes in each hand.

Pre-Ritual, the handmaidens received their education, and assist the temple with chores and the priestess with her preparations. The maidens would also impale kushimi dolls to represent the pain of the worshippers to the doll altar walls and sing their lullaby to appease them.

During the Impalement Ritual, the handmaidens would stake the priestess' hands and feet to the earth while singing their lullaby and speaking prayers over her. They used sacred stakes made of stone to pin the priestess in order to keep her from 'wandering'  during her eternal sleep, all of this taking place in the Chamber of Thorns. The Master of Ceremony would be in charge of the ritual.

After the ritual and their term, the maidens were allowed to leave and continue their lives as they wished. However, if one is a true member of the Kuze family, they continue training to become the next Kuze family head, but leave their duties to the new handmaidens. During their remaining term, however, they impaled dolls dyed in soul ink to represent the priestess pain and enshrine them in Doll Altars.

There are only four handmaidens mentioned by name in the game, but refers to many having lived before them to carry out the same rituals. The four mentioned are: 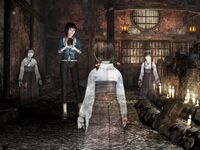