After his younger sister, Shiori, went missing, he began investigating the urban legend of the diary, which led to him falling under its curse and becoming trapped within it. He lost his sanity, and now lures other victims in to be cursed just like he once was. He begs the player to help him escape from the book using its pages, and will attack the player. Maya alerts the player of his presence. Like other victims of the diary's curse, his eyes and mouth are sewn up. In his second appearance, after his death scene, his ghost has clematis leaves wrapped around its neck, like the ones on the Woman in Black's dress.

Before the events of the game, his sister Shiori visits Hasebe to tell him about a bad feeling she is having, about a woman who sees her as a replacement for someone, a strange vision of wandering around a house, and a song the woman loves. Hasebe brushes it off and says that she is just tired. However, some time later Shiori goes missing, leaving behind only a purple book and purple clematis flowers, and he realizes that she was cursed after all. Seeing his sister's disappearance is similar to that spoken of in stories, he begins to investigate the urban legend centered on the Purple Diary and ends up so deeply involved that it "visits" him.

Each night, Hasebe finds himself in the house inside of the diary, in front of a large black door with bloody hand prints on it. He fears that the hand prints are his sister's, but goes through the door and tries to search for her, believing that she may be inside. However, what awaits him inside is the Woman in Black, who sews up his face as hers was in the ritual, killing him, when she realizes that he's not the person she was looking for.

In Another Story, the narrator, Yuuko, is called to meet a man, whom she thinks is her teacher Ms. Hasebe's brother, who has taken an interest in an article she once wrote about musical customs in a newspaper. She senses a gloomy air from him and nicknames him "Gloomy Man". Hasebe asks her many questions about local legends and folk songs, before inquiring as to whether she knows of the Purple Diary. Yuuko admits that she doesn't, but offers to contact him if she finds out any more, but Hasebe warns her that she mustn't investigate the diary, seeming to her as though he is frightened of something. 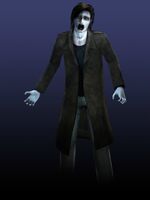