Kanade (奏) were five girls who provided the musical backup to which the Utsuwa dances during the Kiraigou and Rougetsu Kagura rituals. Each girl was responsible for a certain instrument: Song, Chimes, Drum, Flute, and Strings.

The role of Kanade originated with the Kiraigou, but after the first Day Without Suffering, when the Kiraigou became taboo, the ceremony was transformed into the Kagura. Although the form remained the same, with five Kanade providing musical accompaniment for the masked Utsuwa, various details were changed.

Just like the Utsuwa, the Kanade of the Kiraigou wore attire that was very different from that of their tourist counterparts. The girls wore crimson kimonos, their hair was long, and they wore white garlands around their heads. The tourist Kanade attire looked similar to that of present day miko/Shinto shrine maidens: a white kimono jacket worn with red hakama. However, in both versions of the ceremony, they wore pale wooden masks and played the music for the Utsuwa to dance to.

Kanade for the Kiraigou were chosen by the Tsukimori Shrine Maidens, who looked out for girls with a strong Lunar Melody. They were about seven years old, and had to practise their instruments for 100 days in the Rougetsu Tunnels.

The Kanade who performed in the Kagura were older than their Kiraigou counterparts; about ten years old. Because the Tsukimori tradition had died out, the Lunar Melody was not a factor in their selection, and it is not known on what basis the Kanade were chosen. 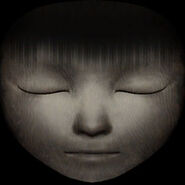