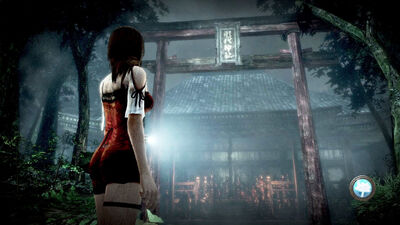 Katashiro Shrine is a setting in Fatal Frame: Maiden of Black Water. It is known as the Shrine of Dolls in the Western release.

It is a shrine located in the center of the Shirazu Forest. There are many dolls lined up around the shrine, and it is rumored to be where the spirits of children roam the area and play, a place with talking dolls, and also there is a mysterious white-haired girl with her doll and they stare at people who go there.

The in-game material states that the shrine underwent a massive reconstruction effort as the mountain was converted into a tourist destination. During the reconstruction and restoration, it was discovered that names were carved into the sides of some of the older dolls, with human remains- more specifically, the remains of children, such as teeth, bones, and hair. These dolls were believed to house the souls of small children, which the religion of the area considered untethered to their bodies until age seven.

Further discoveries revealed more unsettling facts. Namely, the discovery of the Womb Cave below the Shrine, where yet more human remains, along with a number of reliquaries, were found. This strongly suggests that human sacrifice was practiced there, with the bones being 'returned' to the sacred waters of the 'womb' of Mt. Hikami to be laid to rest.

Retrieved from "https://fatalframe.fandom.com/wiki/Katashiro_Shrine?oldid=33257"
Community content is available under CC-BY-SA unless otherwise noted.