This article is about Kirie as the Rope Shrine Maiden. For the article of Kirie as a child, see White Kimono.

Kirie Himuro (氷室 霧絵 Himuro Kirie) is the main antagonist in Fatal Frame. She is a powerful hostile female spirit who was the last Rope Shrine Maiden whose ritual failed, ultimately causing the Calamity.

Kirie was born to the Himuro family. When she became seven years old, she and the other girls of age were subjected to the Demon Tag Ritual. In a locked room, the girls were tasked to avoid being tagged by a blind woman, the "demon." The first tagged would become the "demon" in the next Demon Tag game, and the last tagged, who turned out to be Kirie, would become the next Rope Shrine Maiden and perform the Strangling Ritual. Kirie was kept in seclusion to prepare for her duties as the Rope Shrine Maiden, and was locked inside a cell within the Himuro Mansion for ten years.

During her time of incarceration she was attended to by a young serving girl, at an uncertain time, however, the servant was unfortunatly murdered and thrown into the well in the Courtyard to maintain the secrecy of the rituals, probably by one of the Priests on the orders of Lord HImuro.

Nearing the time of the Strangling Ritual, Kirie met and fell in love with a visitor to the mansion, meeting him on occasion in the mansion's Cherry Atrium.

The Himuro Family Master thought this to be dangerous, however, and ordered for the visitor to be disposed of. Kirie learns of her loved one's fate in a dream and is haunted by guilt, believing she caused his death. Finally, the day of the ritual arrives, and Kirie is taken to the Moon Well to be purified before the ritual. She is then escorted by Lord Himuro and the four head priests to the underground Rope Altar, where the ritual would commence. Kirie laid onto the central stone dais and ropes are tied around her neck and limbs. The ropes are then connected to five wheels turned by the four priests and Lord Himuro to pull the ropes. The wheels are turned until the Rope Shrine Maiden is strangled and her limbs are torn from her body. The stained ropes, now sanctified by the blood of the Rope Shrine Maiden, are taken to the Hell Gate and used to seal it for years.

In order to complete the ritual, the Rope Shrine Maiden must have severed her attachments to the living world. Having fallen in love and learning of her loved one's fate, Kirie was tainted with guilt, and the ritual turned out to be a failure. The Hell Gate burst open, and the Malice contained inside was released all over the mansion. The Malice killed most and drove others mad, and sank the mansion and the surrounding area in darkness. Kirie's spirit was also corrupted by the malice, turning her into a vengeful ghost, bent on making others feel the pain she endured.

Mystified by the dark, abandoned mansion, novelist Junsei Takamine set out to explore it with his assistant Tomoe Hirasaka and editor Koji Ogata. They were trapped inside, however, and eventually succumbed to Kirie's malevolence.

Seeking to uncover what happened to Takamine, Mafuyu Hinasaki, one of his fans, journeys to the mansion himself. He, too becomes trapped inside, but instead of killing him, Kirie captures him because of his resemblance to her late lover. Now, concerned over her brother's disappearance, Miku Hinasaki enters the mansion. She is attacked by the dark spirits of the mansion, but she eventually learns about what transpired behind its walls. In addition to corrupting Kirie, the Malice also had the effect of splitting Kirie's soul in two. One half became the hostile ghost that killed all who entered the mansion, and the other half took the form of Kirie as a child, and held Kirie's sense of duty to protect the mansion and its souls. With the help of Kirie's untainted spirit, Miku is able to release the mansion from the Malice's grip and end the curse, which let the spirits of the mansion find peace, as well as freeing her brother from his captivity by Kirie.

Regardless of which ending is achieved, Kirie is compelled to fulfill her duty as the Rope Shrine Maiden when she is freed from the Malice.

She approached the Hell Gate and forces it to close, using the sacred ropes to bind herself and prevent it from ever opening again. Kirie thus completes her purpose, however, at the cost of forever living in pain. In the normal ending, Mafuyu also decides to stay behind and comfort Kirie for the rest of his life, telling Miku to escape the crumbling mansion.

In the optional Mafuyu ending, Mafuyu escapes with Miku, and Kirie is shown sealing the door by herself. During the credits, however, it's revealed that Kirie finds peace when she is reunited with the soul of her dead loved one.

Kirie's ghost appears in a stained white kimono, with the lacerations ropes used in her ritual still tied to her limbs. Whenever Miku encounters her in the game, she is surrounded by a dark presence, the Malice, appearing as a throng of ghostly bodies congealed into one. Kirie's eyes are never shown, apart from the ending cinematic, and she moves through the air, her feet never touching the ground.

Even when alive, she wears her kimonos wrapped with the right side laying over the left. It is considered a faux pas and incredibly unlucky to dress this way, since only corpses being prepared for funerals are dressed right side over left.

Players will encounter Kirie throughout the game while they explore Himuro Mansion. When encountered, the screen will go black and white and she will follow Miku until a safe room can be reached. During these times Kirie is invincible and using the Camera Obscura on her will not injure her nor defeat her. If Kirie touches Miku she will kill her instantly, and a cutscene plays with her attacking Miku with a swarm of disembodied hands, although at some points her touch is inescapable and signals the end of a chapter. Kirie is only able to be defeated during the final night where Miku will battle her in front of the Hell Gate.

Kirie can still kill Miku instantly if she manages to grab her, so it is recommended to have a Stone Mirror at hand. Although she moves rather slowly, she has a tendency to teleport directly beside or behind Miku where she can quickly attack. She also has the ability to regenerate health after disappearing, making her fight difficult if the player does not stay on the offensive. Kirie can only be damaged by Zero Shots, and Type-90 Film is the best film to use against her. In normal difficulty, it will take approximately 5 to 8 Zero shots to kill her, provided she does not regenerate too much health and high power film is used. It is also important to note that the cave quakes during the battle with Kirie, making it hard to aim the camera properly. Finally, Kirie moves in certain patterns and learning them will make the battle easier. Utilize the whole room to help keep distance from Kirie and to power up shots.

Kirie, after being corrupted by the malice.

A closer image of Kirie's ghost. Note the rope around her neck.

Kirie, before the Strangling Ritual. 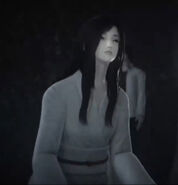