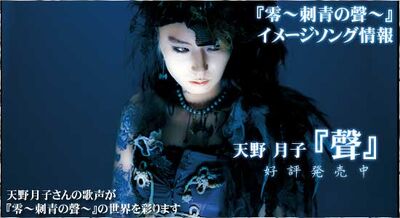 Koe (聲) is the main theme song of Fatal Frame III: The Tormented. The vocals are sung by Tsukiko Amano and was first released in the eponymous single, Koe, on July 27, 2005 before being included in Amano's later albums.

The song can be heard during the ending and credit roll of Fatal Frame III, as well as in early theatrical previews of the game.

"If you were living
In the depths of the ocean,
I would become a fish
Just to be with you.

I would descend the deepest of pits,
Wander the darkness forever as a shadow
Just to be with you.

Our memories still drift vividly
I had been drowning in my own sorrow.

The sun rises, rises, purifies my world
A tepid wind carries off the tattoo carved into my mind.

The fading, fading warmth takes me away
I want to fall asleep in your forgiving embrace

The sun rises, rises, purifies my world
I want to fall asleep in your forgiving embrace

The fading, fading warmth takes me away
A tepid wind carries off the tattoo carved into my mind

Memories are wearing thin with time.
I’m like an earring without its needle.

I forget, it all fades,
Your voice vanishes amidst the noise of a crowd.

It falls apart, I lose my grip,
I’m like an earring without its needle.

I forget, without a trace,
Your voice becomes static."

And if you live, somewhere deep under the sea,

I'd get rid of both of my legs and become

a mermaid so I could swim to you.

That you're alive is all I'd ever hope.

And if you live somewhere deep in the shadows,

I'd get rid of the light and wander into

the darkness, so I'd be close to you.

Through all the days that you and me were living happily,

I only ever remembered all of the days we couldn't keep.

Rising up, rising up, the sun rises up

so that it can make this world as pure as it was.

And the seal carved in blue dividing us two

was stolen and broken by the wind, but I can't see you....

If you're alive, hear what I have to say.

If these words reach you in any kind of way,

I'll get rid of my own existence and throw it away,

and maybe then you'll see...

A "now" that erases my wounds and all of my worries,

your warmth that takes away my pain,

your smile that fixes everything,

And how I've searched for them....

But they're just illusions!

as it follows me closely to this very place.

And your arms that used to keep my fears away.....

if only I could sleep with you, feeling your warm embrace.

Rising up, rising up, the sun rises up

so that it can make this world as pure as it was.

And your arms that used to keep my fears away.....

if only I could sleep, feeling your embrace.

Fade away, fade away, your warmth nearly fades

as it follows me closely to this very place.

And the seal carved in blue keeping me from you

I feel them fading away; all my precious memories.

It never can complete me; all the pain piercing my body.

I seem to be forgetting....All that I know is blurring....

Your voice is disappearing in the noise that I keep hearing...

It never can complete me; all the pain piercing my body.

No one will remember me, 'cause even I'm forgetting.

Your voice has disappeared, becoming the noise that I hear."

If you were alive there by the sea
I would cut away these legs, and becomes a fish
I would drown so deep, if it means reaching you closer
I am willing to be a shadow wandering in an eternal oblivion

Enveloping the air ceaselessly, my heat haze
Simply drowning into the days of wish left unrealized
You weren't here
I know
I know

It's ascending, ascending, the sun
Purifies the place where I belong
This blue engraved etches
Will be gently carried away by the lukewarm, lukewarm wind

If these words, will ever reaches you
Even if it'll hoarse and took away my vocal cord
It's fine for me to lose them

At this very moment as my vivid wounded scar vanishes
The which robs every torment away, your warmth
I seek them
I yearn them
Even if it's an illusion

It's vanishing, vanishing, the warmth
Bringing them to the place where I belong
This arms which erases even my sin
I wish to slumber within it's cuddle

It rises, rises, the sun
Purifies the place where I am
These arms which eases my punishment
I want to be embraced and sleep in them

It faded, faded, the warmth
Carrying them to the place where I am
These azure carved etching
Gently blown away by the tepid, tepid wind

It's rotting away, these fragments of memories
It's as if a piercing loses it's needle
It's slowly be forgotten, it is obscuring and blurry
Your voice slowly fading into the static
It rotted away, it sloughed away
As insignificant as the earring without it's piercing
It dissolved without a trace, completely erased from memories
Your voice becomes the static noise. 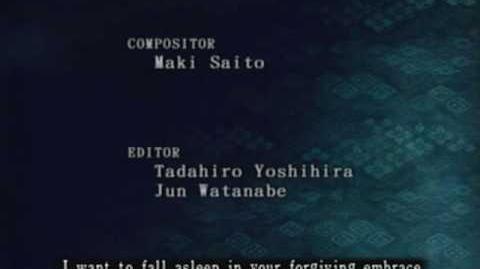 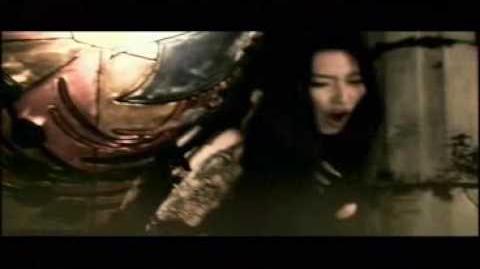 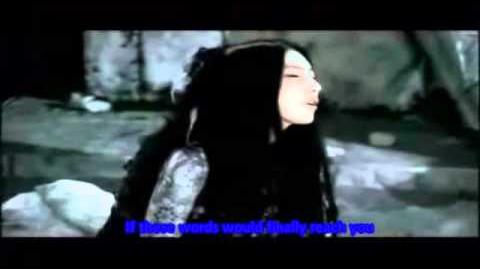 Retrieved from "https://fatalframe.fandom.com/wiki/Koe_(song)?oldid=37355"
Community content is available under CC-BY-SA unless otherwise noted.