Kyouka Kuze (久世 鏡華 Kuze Kyōka) is a hostile female spirit and the only daughter of Yashuu Kuze in Fatal Frame III: The Tormented.

At some point, a young folklorist named Akito Kashiwagi was allowed entry into the manor under the guise of conducting research. However, his true purpose was to produce a child with Kyouka where he was taken into her room at night and the two enjoyed one another's company. Akito constantly complimented Kyouka on her beauty, especially her long dark hair, even taking pictures of her with his camera. He fascinated her with stories about the outside world that she was not allowed to experience for herself. When Kyouka learned that Akito was collecting songs, she played some songs passed down the Kuze family for him. He recorded this information in his Legend of Song book.

The two fell in love and longed to be together, but men were only permitted to stay in the Kuze house when the snow was on the ground. Akito left Kyouka, now pregnant, with a set of Echo Stone Earrings, which would allow them to hear each others' voices and he promised to return for her. They would never see each other again, because Yashuu, fearing Akito's attachment to Kyouka and his knowledge about the Kuze family's rituals, murdered him. Kyouka never found out.

Kyouka and Akito's union bore a son. Unfortunately, male children were forbidden to stay in the manor past the age of four. She named her son Kaname; noting that the name symbolized a connection between her and Akito, though this correlation is never explained. It is unknown exactly how long Kyouka was allowed to keep Kaname with her. She notes in a diary that he would be cast out at the age of four, which likely meant he would have been thrown down a well and left for dead. Instead of accepting this fate for her son, Kyouka snuck him out of the house and sent him to live at a nearby village. She sent with him one of the earrings Akito had given her, believing that all three of them would maintain their bond and eventually be reunited.

Several years later Kyouka had a daughter, whom she named Amane, with an unnamed man. She told Amane about Kaname, but insisted that it was a secret that the child should never speak of. As time passed, Kyouka continued to pine for Akito, constantly hoping that he and Kaname would return for her. She would spend hours combing her hair and even began to remove clumps of it and pinning them up around the mirror in her room.

Kyouka was mostly confined to her upstairs room where the handmaiden Shigure took care of her. Even when the unleashing occurred, Kyouka was still completely consumed with thoughts of Akito. In her last diary entry she expressed regret for having left his photo and earring behind in the manor. She began to fear that she would soon forget his face, and was consumed by solitude. With such pain and regret, Kyouka was taken by the Rift and died.

As a ghost Kyouka is called Woman Brushing. She sometimes has a beautiful face, but often it was shown marred with appears to be blood. She continually searches the manor for Akito or plays her koto hoping for his return. Due to Kei Amakura's striking resemblance to Akito and the fact that Kei carries his old camera, Kyouka believed Kei to be her lost loved one. She hurled herself at him, berating him for not coming back for her.

Presumably, Kyouka was one of the shadow ghosts seen crossing over to the other side after Rei Kurosawa lifted the manor's curse. 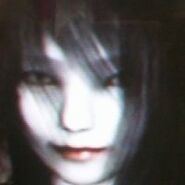 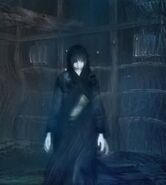