Fatal Frame Wiki
Register
Don't have an account?
Sign In
Advertisement
in: Incomplete articles, Deceased, Spirited Away,
and 10 more

Misaki Asou (麻生 海咲 Asou Misaki) is one of the four protagonists in Fatal Frame IV: Mask of the Lunar Eclipse. She is one of many of Fatal Frame's characters that are descended from the famous folklorist and spiritualist, Dr. Kunihiko Asou.

Misaki, along with four other girls, once lived on the strange Rougetsu Island. Like her friends, Misaki has no memory of her childhood and comes to the island to recollect the pieces as well as find something to stop the progression of their Getsuyuu Syndrome. She comes to the island along with her friends (though Ruka Minazuki comes at least a day later) to find out what happened 10 years ago to set these two issues in motion. Like many of her predecessors in the Fatal Frame series, she, too, possesses a strong sixth sense. She is able to see, hear, and feel spirits. Misaki comes to the island with a camera that has been passed down in her family. She is seen as strong-willed, stubborn, and sometimes obstinate in the company of Madoka Tsukimori (Msaiki's friend) who is much more meek and tentative to her friend.

During the events leading up to the deaths of Marie Shinomiya and Tomoe Nanamura, Misaki's illness was growing worse. She began to be plagued with the images and dreams of a girl in black, calling her back to Rougetsu Island. While investigating the lower level of the sanatorium, Misaki was separated from Madoka Tsukimori (Misaki's friend) who accompanied her despite her personal protests. Misaki deemed that returning to the island was the only way to stop the progression of their illness, or they (Madoka, Misaki, and Ruka) would die the same way as their friends.

Unknown to Misaki and Madoka, Ruka followed suit to the island after them, but her arrival was hours behind. While Madoka was eventually cornered and spirited away by the ghosts of the island, Misaki followed the visions of the girl in black to more information regarding her past, the old island ritual, and her connections with one of the patients, Sakuya Haibara. When Misaki was a child, she became friends with the sickly and often reserved Sakuya. Sakuya doted on her, her feelings to Misaki were very motherly (possibly due to her own illness and distance with her own daughter, Ayako Haibara) and she allowed Misaki to visit her almost daily. However, when Sakuya felt that she was falling further and further into her illness, she made a doll for Misaki, telling her that the doll's name was "Miya", a combination of their names. Eventually, in one vision, Misaki sees Sakuya becoming violent with the hospital staff and eventually, she was taken away before Misaki could react.

Not long thereafter, Misaki and her friends were taken the true Ceremony of Passage, to the shrine underground. During that time, Choushiro Kirishima took up the mantle to find the missing girls. The player sees that the five young girls were groomed and "cleansed" to be kanade for Sakuya when she performed the Kiraigou during the lunar eclipse. While this happened, an alternate Ceremony of Passage was performed with alternate kanades and another utsuwa for tourists. It is not stated why, but it can be assumed that the ritual failed due to Sakuya's progressing illness. During the ceremony, she became erratic and when the moon passed over her, Sakuya's mask broke apart, causing the kanade, including Misaki, to collapse. It is largely believed that this is why the girls have no recollection of their memory up until that very moment. While the true ceremony's failure was minor compared to the alternate one; all six performers of the dance were killed.

In the end of the chapter eight, Misaki's final chapter, occurs the first boss fight with Sakuya. After the fight, it is revealed that the girl in black is, in fact, her doll Miya, in a spirit-like form, manifested by Misaki and Sakuya's joint wishes and feelings. Hereafter, Misaki finally recalls the failed ceremony and Sakuya being lead out of her hospital room, turning to Misaki and wishing her goodbye. In the memory, Misaki as a child is seen talking to her doll to reassure herself that Misaki was Misaki. Once Misaki finally remembers, a less decrepit form of Sakuya stands, instead of the girl in black, and Misaki is holding her doll, sobbing. Sakuya reaches over and hugs Misaki, before flashing a sinister smile.

No matter what the outcome is, Misaki is seen collapsing on the altar with her doll and the shrine doors slamming shut on her and Ruka is left to finish off Sakuya in her final form.

The regular "bad ending" of Fatal Frame IV leaves Misaki's fate ambiguous, but Ruka is seen passing through the underground shrine before ascending up to the lighthouse shrine, passing over the doll Miya, and Misaki is nowhere left in sight. Nothing about Misaki's fate is addressed in the normal ending.

In the good ending, Misaki is seen in the ending credits where the ending credits is not an actual cutscene, rather pictures. Misaki wakes up and see Madoka standing before her. She drops Miya and runs over to her friend. Madoka smiles and leads her out to the Tsukuyomi Beach before disappearing into the Afterlife with the rest of the spirits. Misaki watches the souls of the islanders pass on, and it can be presumed that she and Ruka meet up and leave the island together. 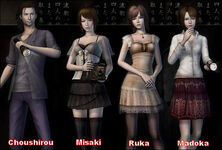 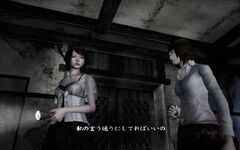 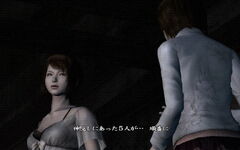 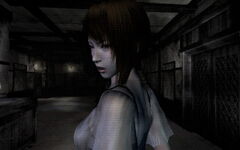 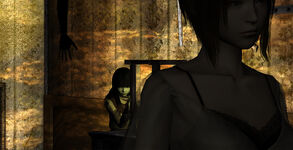 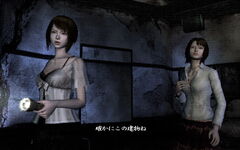