Rei Kurosawa (黒澤 怜 Kurosawa Rei) is the main character in Fatal Frame III: The Tormented. Having survived a fatal car crash that took the life of Yuu Asou (Rei's fiancé), Rei is beset with grief and guilt, wishing to be with him once more. Her grief becomes dangerous, however, when she starts to visit a strange manor in her dreams. It is known as the Manor of Sleep, and after seeing Yuu inside, Rei follows him in further and further, not knowing that those who follow the dead too far in never return.

Rei has short dark-brown hair that falls just above her shoulders in choppy lengths where she bears a fringe which is parted to the left, dark-brown eyes and a beauty mark close to her right eye.

There are many outfits available for her to wear but she is more commonly seen in the default costume.

Her alternate costumes consists of:

Rei works as a professional freelance photographer where she met Yuu Asou while they were in college while he studied anthropology and folklore. Yuu was good friends with Mafuyu Hinasaki and Kei Amakura, and the three worked together in their research of the occult and local customs. Before disappearing, Mafuyu entrusted Yuu with Miku Hinasaki's care should anything happen to him, and after becoming engaged, Rei and Yuu bought a house together and took in Miku. Rei was never told about Miku's past, or what had happened to her brother, and the two became good friends, Miku began working under Rei as her assistant.

One rainy night, Rei was driving with Yuu when the car crashed off the side of the road and Yuu was killed. Rei blamed herself for Yuu's death, and since then showed little interest with the outside world, only occasionally leaving her home for her job.

Regardless of what ending is achieved at the end of the game, Rei's fate remains the same.

After briefly re-uniting with Yuu Asou one last time at the Abyss of the Horizon, Rei is brought back to the real world, free from the curse of the Snake and Holly Tattoo. She, along with Miku Hinasaki, now understand that regardless of why they were allowed to live, they must continue to survive.

Rei shares the same initials as the main antagonist of the game - *Rei* *Ku*rosawa - *Rei*ka *Ku*ze. 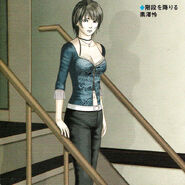