Sakuya is the daughter of Shigeto Haibara and the older sister of You. When she was young, her mother contracted Luna Sedata Syndrome and committed suicide in Haibara Hospital. This drove Shigeto to begin researching the disease and treating the patients diagnosed with the disease.

Soon, Sakuya begins to show symptoms of the same syndrome her mother suffered from, so she was admitted in Rougetsu Hall where she meets Misaki Asou, one of the main protagonists of the game. As Ayako was also staying in Rougetsu Hall, Sakuya hoped to spend time with her daughter and guide her with kindness, however, she was unable to do so, and Ayako continued to act out. During Sakuya's stay there, she collected dolls in order to preserve a sense of self and to keep her memories, as one of the symptoms of Luna Sedata Syndrome is memory loss. After befriending Misaki, Sakuya passed down to her a doll they both named Miya - a combination of Misaki's and Sakuya's names. During this time You left the island to conduct an independent research on the disease.

Nearing the end of his research Shigeto found a link to Luna Sedata Syndrome and the Ceremony of Passage performed in Rougetsu Island's past. Believing that reviving the ceremony would help cure those suffering from the disease, Shigeto, his son You, and master mask-maker Souya Yomotsuki collaborated to arrange a ceremony in secret.

In order to begin the ceremony, six people were needed to fill the specific roles. The central performer, known as the Utsuwa, would dance to the sacred Tsukimori Song

and don the Mask of the Lunar Eclipse. Shigeto chose his own daughter, Sakuya, to be the Utsuwa for the ceremony. Five children were then required to fill the roles of the Kanade, the five instrumentalists who played the Tsukimori Song through the length of the ceremony. You Haibara was charged with kidnapping five girls from Rougetsu Hall to be the Kanade of the ceremony. The five were Ruka Minazuki, Misaki Asou, Madoka Tsukimori, Tomoe Nanamura and Marie Shinomiya. In preparation for the ceremony, Souya crafted five Kanade masks for the girls and You taught them to play a restored version of the Tsukimori Song. With the preparations completed all that was left was to wait for lunar eclipse to perform the ceremony under.

On the night of the eclipse, a simplified, tourist version of the ceremony was to

be performed outside of Rougetsu Hall. Beneath ground, past the ancient tunnels in times of old, the true Ceremony of Passage was to be performed in secret. The five girls were gathered in a circle and in the center Sakuya, wearing a true Mask of the Lunar Eclipse forged by Souya, began to dance to the Tsukimori Song. During her performance Sakuya lost focus and began to panic. Cracks grew on the Mask of the Lunar eclipse and in a moment of climax it shattered, revealing Sakuya's bloomed face. At that moment all participants of the above-ground performance died of a sudden heart attack, while below Sakuya and her Kanade collapsed. The ceremony had failed and the five girls lost their memories. Sakuya fell into a coma and was to be enshrined underground.

The Day Without Suffering[]

Shigeto's research allowed him to discover some vital information on the Kiraigou, the precursor to the Rougetsu Kagura. He, You, and a master mask maker decided to resurrect the ritual with Sakuya being the utsuwa. The utsuwa is the ritual's masked dancer who acts as the channel of the souls of the dead. Five girls were needed to make up the Kanade, the ritual's instrument players, so You kidnapped five, including Misaki, to complete the ceremony.

Parallel rituals were done on the night of the Kiraigou. The true and original ritual with Sakuya was taking place in a secret underground chamber while a tourist version is also happening above the surface. Due to this reason, the two utsuwas and all ten Kanade collapse with Sakuya and her Kanade collapsing, then having memory loss and in Sakuya's case, falling into a coma. The tourist version participants also collapsed, but never woke up.

Sakuya was then kept in a ward in the Rougetsu Hall basement during the course of her coma with a nurse and a guard outside her door. On the anniversary of the ritual, Sakuya awakened with her face manifesting the effects of blooming, one of the symptoms of Getsuyuu Syndrome. She leaves her room and starts wandering the city, infecting everyone who sees her face. Soon, the entire island population was wiped out by Sakuya.

Ten years after the Rougetsu Island incident, Misaki Asou returns to the island with her friend, Madoka Tsukimori, to ferret out a grey spot in Misaki's past: a girl named Miya, haunting her, is somehow connected to the island and it's horrific events. Miya's ghost guides Misaki right to the Underground Lunar Hall, where the Kiraigou took place previously - that Misaki has particiapted in - as well as Sakuya's Kanade. Misaki learns soon, that Miya has eventually led her right to Sakuya's malicious spirit, resulting the two in a fight. After Misaki defended herself from the corrupted ghost, Sakuya takes the form of Miya, pointing at a doll in the middle of the hall - who resembles the exact appearance of Miya. Though the girl, who haunted Misaki turns out to be a doll only;  it is a significant toy both from Misaki's and Sakuya's past at the same time: the two, while they have been treated in Rougetsu Hall, became close friends, helping each other mutually not to lose their memories. As a token of their relationship, Sakuya gifted one of her dolls to her friend, giving it the name Miya (ax the mixture of Misaki and Sakuya).

However, as the treatment proceeded and the ceremony was prepared, it was a necessary step to sever the two from each other - after Sakuya's departure, Misaki used the doll to keep her memory intact during the syndrome, just as Sakuya did - and through these times, Miya began to hold the soul both of Sakuya and Misaki; and the memory of their friendship. As Misaki recovers the doll she lost ten years ago during the failed ritual, regaining her lost memories, she begins to cry - Sakuya, seeing her old friend in sorrow, transforms into her normal form, comforting Misaki for a brief moment. Sakuya cracks a mysterious smile before vanishing and Misaki collapses.

Aborting The Day Without Suffering[]

Ruka Minazuki, another native of the island, exploring her past; learns the chain of events that lead to the disaster and gains the necessary tools and knowledge to put an end to it. Although Sakuya attempts to vanquish the visitor once on her journey, Ruka still manages to recover the reforged the Mask of the Lunar Eclipse. In the possesion of it, she tracks Sakuya down to the Tsukuyomi Peninsula Lighthouse's top, where the corrupted spirit was seeking a way to be close to the moon as possible. Ruka fiercely battles Sakuya, successfully weakening her down long enough, to play the Tsukimori song on the organ there. Sakuya, hearing the melody, calms down sufficently, so Choushiro's ghost could replace the mask on her face. Sakuya, now being able to fulfill her task as a medium, guides the lost souls to the Afterlife before she'd cross herself over as well, and with it, finally finding peace. 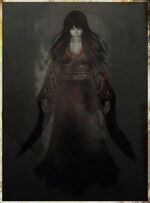 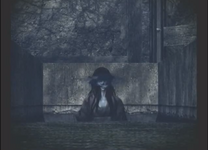 Sakuya appearing before Ruka. Notice her face is blooming 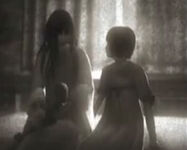 Sakuya and Misaki, during their treatment 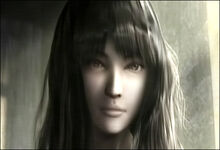 Sakuya Haibara, during her hospitalization 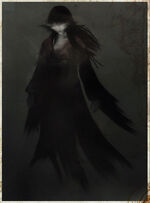