Seijiro Makabe is a male character in Fatal Frame II: Crimson Butterfly. He is the folklorist who came to All God's Village with his assistant, Ryozo Munakata, to take a picture of the Hellish Abyss with the Camera Obscura. He is voiced by Jun Hazumi in Japanese.

Not much is known nor mentioned about Seijiro Makabe other than he is a folklorist who has Ryozo Munakata as his assistant and shares the same interest in occultists like his friend, Dr. Kunihiko Asou who entrusted him with his first Camera Obscura and Spirit Stone Radio. Seijiro requested these two items because he wanted to pay All God's Village a visit to take a photo of a forbidden ritual. After departing with the Camera and the Radio Dr. Kunihiko Asou never heard from Seijiro again nor did he see his two inventions.

Seijiro Makabe entered All God's Village as a traveling folklorist, looking forward to doing research on the secret family rituals there. Ryozo Munakata, his young assistant, had also joined him (he had old ties to the village since he visited there once as a boy).

Seijiro stayed with Ryokan Kurosawa and his family. The Kurosawa family had been preparing their twin daughters (Yae and Sae Kurosawa) for the Crimson Sacrifice Ritual at the time, as the previous ritual had failed. However, to satiate the Hellish Abyss long enough so the Repentance would not occur, Seijiro was chosen to go through the Hidden Ceremony. He would become a temporary sacrifice, known as a Kusabi.

At first, Seijiro did not know about his true fate, though he began to become suspicious of the grand hospitality of the villagers when he first arrived in All God's Village. After a while, he received a warning from Sae and Yae. Afraid for Ryozo, he sent him home ahead of him to be safe. Soon after Ryozo's escape, Seijiro was captured by the Veiled Priests and imprisoned in the Cell. Since this room was used as a store-house for old documents, Seijiro was able to continue his research and learn even more on the forbidden rituals. At first, no one would say what they intended to do with him. Later, when he learned more of his fate, he was not sorrowful or frightened, but happy that he would get a first-hand experience of the Gate of Hell. 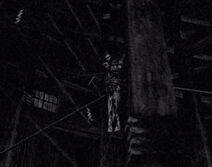 Makabe was subjected to the Cutting Ritual and cast into the Hellish Abyss. The Ritual did calm the the Hellish Abyss a little, but in the end, it was not enough. When Sae's solo Crimson Sacrifice Ritual also failed, the Repentance was unleashed onto All God's Village. Seijiro and Sae's spirits returned, murdering the rest of the villagers that survived the Repentance.