Shiragiku (白菊) is a female character in Fatal Frame: Maiden of Black Water. She is a white-haired young girl who appears around Katashiro Shrine.

She is able to read people's minds (a skill known as Mitori) and shows up at the Katashiro Shrine with a hitogatami (人形見), a faceless doll, whispering mysterious words to visitors.

Shiragiku, being a Miko who is closer to death at a young age and was sentenced to live not longer than 7 years, has been chosen to be a sacrifice for Mt. Hikami. It is known that as long as the sacrifice is closer to death, the deeper is her understanding of the afterworld, and the longer she will be able to live as an eternal flower. Born with white hair and red eyes, she was not able to really make friends with her fellow Miko. One day, under the cherry blossom trees, she meets young Dr. Kunihiko Asou, and there their friendship bloomed. At the day of the festival, she explains that the sacrifice is given the privilege to choose her future partner. She offers Asou her spirit item: a bundle of her hair, as a sign of their promise. Unfortunately, as time passed, Dr. Asou had forgotten this promise and was not able to return to Shiragiku's side.

Shiragiku is a girl with short white hair, her signature, that has bangs and two red ribbons tied at the front, red eyes, and most often wears a black kimono with a gold spider lily pattern, a red and black obi, and sandals with red straps. She sometimes appears wearing a white variant of her kimono, usually in flashbacks.

If Ren allows Shiragiku to pull him into the box inside the Bride's Room, a flashback soon plays of her playing with a young Kunihiko and expresses her wish to remain hidden forever with him before the pair hug each other. Just then, however, she remembers her duty to become a pillar and her eternal duty and pushes Kunihiko away, urging him to enjoy the privilege of death and to live without her.

Upon pushing Kunihiko, Ren finally wakes from his dream and finds himself outside the House of Joining.

If Ren chooses to fight and defeat Shiragiku, a slightly different flashback appears, where she simply expresses happiness with spending time with Kunihiko before her fate. Content at seeing him for the last time, she urges him to forget all about her.

When Shiragiku attacks the character, she can raise the faceless doll in front of her, and then appear two more false Shiragikus (if you photograph them, they will disappear, and in their place will remain two dolls).

She was born in the 19th century, when Mt. Hikami was still home to strange rituals.

She was born with psychic abilities, however she was very frail and was not expected to live long. She had once been gravely ill and nearly died, but managed to recover.

She was sent to Mt. Hikami, so that she could be made into a Pillar. It was said that those who were close to death could not die, and would make for stronger Pillars.

Shiragiku chose Kunihiko Aso, her only friend, to cut a lock of her hair as a token during a special ceremony.

When Dr. Aso grew up, he came to think that the surreal ceremony was just a dream.

He visited Mt. Hikami as an adult, and passed through the Shrine of Dolls, but did not sense Shiragiku's presence.

Shiragiku, now a Pillar deep underground, waited for the one who had her token. Until then, she'd play with ghosts of children killed on Mt. Hikami. 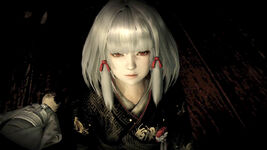 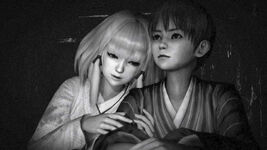 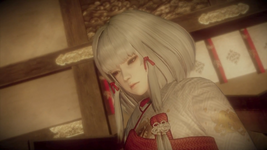 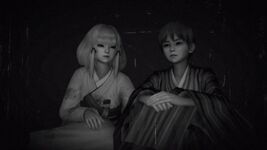 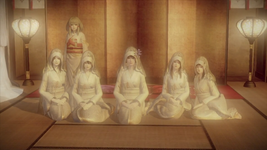 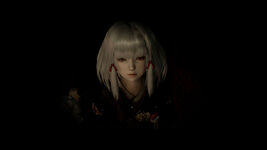 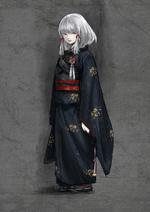