The Calamity is a tragedy that occurred in Fatal Frame. The horrible incident that took place immediately after the strangling ritual at the Himuro Mansion in 1837, where Kirie Himuro's soul was corrupted by the Malice.

The event known as the Calamity occurred on December 13th, 1837. The ritual intended to keep the Hell Gate sealed failed, which allowed the doors to the land of the dead to open and the dead to return in the form of The Malice.

The ritual is believed to have failed due to Kirie, the last Rope Shrine Maiden, forming earthly attachments and regrets which prevented her from filling her duties, though in the Xbox version, it is hinted that Kirie also purposefully shattered the True Holy Mirror to sabotage the ritual.

Once the gate's seal failed and the Malice poured out, the gathered members of the Himuro family and nearby village who came in contact with it became corrupted, going mad and killing themselves or others. The Himuro Family Head went insane and began a rampaging slaughter, during which he cut down survivors and beheaded the family priests. Kirie's spirit became warped by the Malice, splitting it in two.

The presence of the 5 Holy Mirrors in surrounding shrines managed to keep the Calamity from spreading further. However, the corrupted spirits of those who died during the massacre are trapped in the Himuro Mansion, reliving the events over and over and maliciously seeking new victims.

While the particularly strong spirits of the mansion always had the ability to influence the living, after an earthquake shatters the remaining 5 Holy Mirrors in modern times, visitors to the mansion find themselves trapped and "spirited away", or become victims of the Rope Curse after encountering Kirie's corrupted spirit. Those trapped in the house are seemingly drawn back in time as the house and grounds reset further to the way they were on the day of The Calamity, to relive the massacre. If they are victims of the Rope Curse, which causes a new rope mark to appear on the person's limbs each evening, failure to stop or resolve the repeating Calamity by the fifth night, when a rope mark appears around the victim's neck, results in the accursed being ripped apart, limb from limb. Those killed by the spirits of the Calamity become corrupted themselves and join those trapped in the mansion.

The Calamity is aborted by Miku Hinasaki in 1986, through her search for her brother at the mansion. Using the True Holy Mirror, Miku successfully banishes the Malice from Kirie's soul and frees it from corruption, rejoining the two halves. Afterwards, Kirie fulfills her duty, finishing the failed ritual and tying her spirit in front of the Hell Gate to act as a permanent seal. This act requires Kirie to endure a state of eternal torment, and Mafuyu volunteers to die and remain at Kirie's side as a comfort to her, to ensure she remains in her role. 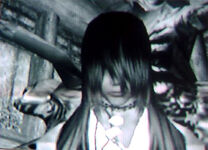 Kirie Himuro, the heart of The Calamity, possessed by the Malice. 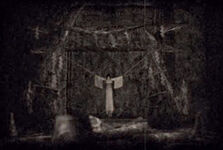 Kirie, after she was set free from the Malice, puts an end to The Calamity.
Community content is available under CC-BY-SA unless otherwise noted.
Advertisement