Tomoe Hirasaka (平坂 知恵 Hirasaka Tomoe) is a female character in Fatal Frame. She was an assistant of Junsei Takamine who went to explore into Himuro Mansion, along with Koji Ogata and Mr. Takamine, to search materials for Takamine's new book.

Throughout the exploration of the mansion, Koji Ogata (Tomoe's colleague) was cursed and brutally executed by a malicous ghost named Kirie Himuro. Junsei Takamine and Tomoe found the remaining of Koji and realized that they have to prevent the curse before they would share the same fate with Koji. Tomoe's further investigations revealed the method, which with she and Takamine could have put an end to the curse, known as the Calamity; however, Kirie caught her twice already by the time Tomoe found out about the method.

Before she could have told Mr. Takamine the information, she began to suffer symptoms of the same as Koji, due to her "sixth sense". A cutscence appeared in the Abyss, where she was strangled by Kirie and becomes "torn apart" as Koji.

As Miku Hinasaki went into the Fish Tank Room, Tomoe appeared behind her and what appears to be trying to strangle her.

Tomoe's ghost has her head down making it difficult to take a photo. Like the other ghost, Tomoe can scream at Miku and paralyze her. Once Miku defeats her, she appears once more in the backyard. 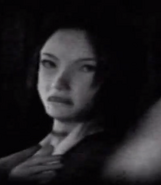 Tomoe looking back at Kirie

A photo of Tomoe taken with the Camera Obscura.

Tomoe when she was alive, and in her ghost form.