The Unfathomable Forest (不知ノ森 Shirazu no Mori) is a setting in Fatal Frame: Maiden of Black Water that is a forest in Mt. Hikami. Ever since it became a hotspot for suicides, a big fence has been put around it, which people sneak under. There are rumors of a murderer hiding within its premises...

The forest is located halfway up the hike to the summit, always blanketed in a thin veil of mist, the winding trees and many paths confusing the path through. A folk tale of the area states that those who begin to wander the forest forget who they are and where they are going, getting lost among the winding roads leading through it. Those who are lost never return- though their belongings can be found scattered throughout the forest.

A prevailing rumor is that there is a murderer around the forest, killing anyone who enters. In reality, this murderer is not a physical being, but the ghost of Kyozo Kururugi, who still haunts the area after killing the shrine maidens of the mountain. He repeats his method of murder- running his victim through before gouging out their eyes with a thick, heavy blade. Though his identity is unknown, Kyozo murdered a man in the forest, which was caught on video, as could be seen in a Fatal Glance.

The Forest is a popular suicide spot- and several individuals, including Shino Kururugi, have hanged themselves from the trees in the area- evidenced by the many nooses tied around the branches. 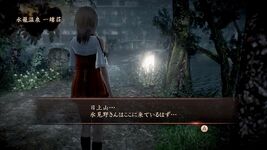 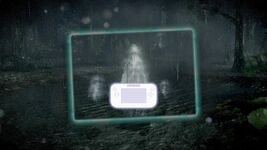 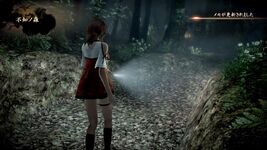