Woman in Box, known in Japanese as "Hako ni Kakureta Onna" (Woman hidden in box), is a hostile female spirit in Fatal Frame II: Crimson Butterfly. She is one of the violent spirits that haunt the lost All God's Village and was yet another witness of the Repentance, choosing to hide in a kimono box with her newborn child to escape the coming darkness. She became trapped, however, and she and her child were both swallowed by the darkness.

Woman in Box's true name is never revealed in-game. However, it can be assumed that she belonged to the Osaka family, as she hid inside a kimono box within the Osaka House. The identity of her child is also unknown, and it never physically appears in the game. Not much is known of her true identity, aside from her death from the darkness of the Repentance.

Woman in Box always appears by crawling out of a box or well. She moves in a lethargic manner, taking slow steps forward and stopping when close enough to attack. She stays bent forward with her long hair covering her face most times, and after stopping and raising her head, her face can be seen as aged. She also wears a plain kimono, common to other inhabitants of the village.

Woman in box has a very distinct pattern of attack from other ghosts. While slowly lurching forward, the camera's Capture Circle frequently senses and loses shutter chances for short periods of time. After she has gotten close enough to the player, she raises her head and arms and quickly moves forward in a grabbing motion, during which the camera senses a Fatal Frame. Once enough damage has been dealt to her (leaving her with about 1/3 of her health), she begins to disappear and move around the room more frequently. She also forgoes the slow lurching, and begins to charge quickly at the player with her arms outstretched.

Battling her can be nervewrecking at first, however, her attack patterns eventually become easy to exploit. One strategy is to "bait" her fatal frame by getting close and quickly backing away, prompting her to raise her head and attack. Another, more cautious strategy is to exploit the shutter chances during her forward movement. Unlike the fatal frames, the shutter chances occur more frequently, and she does not disappear immediately afterward. When she begins charging, it is best to stay in an open area, as she will run from behind walls. During her charge, however, there is a much longer chance to shoot a fatal frame, pushing her back and dealing a lot of damage.

Images of Woman in Box 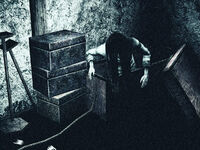 Woman in Box crawling out of a kimono box.

Concept art of her before becoming a ghost. 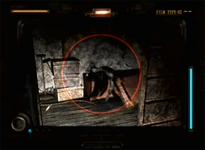 Woman in Box appearing as seen through Viewfinder Mode. 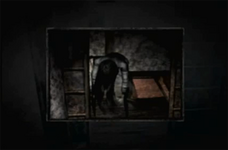 A camera shot of Woman in Box as she moves forward. 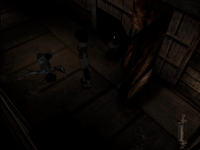 Woman in Box, lying motionless in the Kurosawa House.