Yashuu Kuze is a hostile female spirit in Fatal Frame III: The Tormented. She was the last Kuze Family Head.

Her primary duty was to keep the Kuze Shrine running smoothly to prevent the Unleashing from occurring.

Yashuu had a daughter, whom she named Kyouka, with an unnamed man. Although not specified in the game, it seems likely that this man was brought to the Kuze Shrine for the sole purpose of producing a female heir with Yashuu for the Kuze Family. When Kyouka was old enough she, too, was expected to produce a female heir. Yashuu allowed Akito Kashiwagi, a folklorist, to stay as a guest to the shrine over the winter in order to achieve this. Akito and Kyouka fell in love with each other, and Akito planned to leave the Kuze Shrine and take Kyouka with him when the snow melted. Kyouka was now pregnant with his child; however, Yashuu murdered Akito and hid his body so Kyouka would never know what happened to him. Kyouka gave birth to a boy, whom she named Kaname. He was a forbidden child because the Kuze Shrine was an exclusively female shrine. Kaname was to be disposed of by the time he reached the age of 4. Kyouka knew this, but couldn't bear to kill her and Akito's love child. Instead of doing this, Kyouka found a way to sneak Kaname out of the shrine to the safety of a nearby village. With Kaname, Kyouka sent one of the Echo Stone Earings that Akito gave to her. Yashuu seems to have been aware of this break with tradition, but allowed it for unknown reasons.

Yashuu brought in many more outsiders to try to produce a female heir with Kyouka. Eventually Kyouka gave birth to a daughter with an unnamed man, whom she named Amane. When Amane was old enough, Yashuu chose her first to be a Handmaiden. Yashuu also "adopted" girls from nearby villages to fill the other three Handmaiden positions. Yashuu took in Hisame, Shigure and Minamo, who adopted the Kuze surname as their own. Yashuu appears to have favored Hisame above the Handmaidens, probably because she was the most dutiful. When it came time to choose a new Tattooed Priestess, she chose Reika Yukishiro, the sole survivor of an unspecified disaster at a nearby village. Reika also took on Kuze as her surname. Yashuu also chose two Engravers to carry out the Piercing of the Soul once Reika was able to assume her duties as a priestess. Both the Piercing of the Soul and Impalement rituals were successful. Everything was running smoothly at the Kuze Shrine, until Yashuu found out that Amane had led a man inside to see the recently impaled priestess.

Yashuu went down to the Chamber of Thorns and struck the man down with a hatchet, but she was too late: the man had already awakened his love, Reika, from her eternal slumber. As a result of seeing her lover killed right in front of her, the tattoos etched into Reika's skin entered her eyes and caused the Unleashing to occur. Since she was so close to the Chamber of Thorns during the Unleashing, Yashuu became covered with the pain of holly. However, Yashuu survived this, and managed to return to the manor and begin preparations to contain the Rift. First, she ordered the other Handmaidens to impale Amane at the bottom of the Abyss for breaking the Kuze Code. Yashuu knew she had to stop the Rift from spreading to the surrounding areas, so she summoned for Shrine Carpenters to come and seal in the Kuze Shrine. As she waited for them to arrive, she prayed for the priestess to slumber at the Engraving Shrine.

The Shrine Carpenters failed to prevent the Rift from spreading, even after being sacrificed as Sacrifical Pillars. Everyone in the manor succumbed to the Rift before Yashuu, besides the remaining Handmaidens. Though she felt pity in doing so, Yashuu ordered Hisame to perform the Final Impalement. Hisame impaled both Shigure and Minamo in the Enclosed Room. It is during this time that Yashuu realizes who the man that entered the Chamber of Thorns was, because she recognized the Echo Stone Earring he wore. The man was in fact her grandson, Kyouka's forbidden child, Kaname. She feels some remorse, and writes at the end of her 2nd diary: "...How sorrowful." Sometime later, Yashuu finally succumbs to the Rift, leaving Hisame alone in the manor.

Yashuu's spirit becomes tainted by the Rift and wanders the dream manor, trying to stop the events that led up to the Unleashing.

She attacks by extending the hands that surrounds her body. Before attacking, Yashuu hovers from side to side, and sometimes, her attacks will cause the viewfinder to be covered up by hand prints. Making it difficult for the player to get a good shot of her. When she attacks, she sends her hands out and suspends the player. While being suspended the tattoo appears on the player. 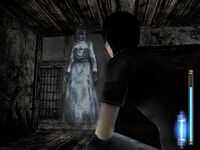 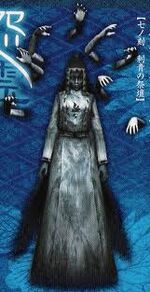 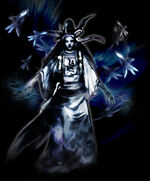