Yoshino Takigawa (瀧川 吉乃 Takigawa Yoshino) is a female character in Fatal Frame III: The Tormented. She becomes one of the violent spirits that are trapped within the cursed Manor of Sleep.

Yoshino appears as a distressed woman, usually running away or huddled in a fetal position and mumbling to herself. After her disappearance in the hospital, she is normally accompanied by shadows of her dead relatives hovering around her. During her attacks, the tattoo that curses Yoshino appears all over her body. Yoshino also appears frequently to haunt Rei Kurosawa in her home. Her haunting include a shadow that stalks Rei, Yoshino appearing beside Rei's bed and her voice screaming through the telephone.

Yoshino was the sole survivor of a disastrous plane crash that took the lives of her family and Naoya (Yoshino's fiancé). She was found four days after the crash suffering from few physical injuries, but mentally unstable. It was determined that she suffers from Post-Traumatic Stress Disorder (PTSD), and was subsequently hospitalized in Katsuragi Hospital. During the four days, Yoshino was surrounded by the bodies of the victims of the crash, including her relatives and boyfriend. Because of this, she also suffered from the Survivor's Syndrome, believing she should be blamed for everyone's deaths because she is the sole survivor. She was given a diary to write in during her hospitalization where she wrote of her thoughts and feelings.

During her stay in the hospital, however, Yoshino began to drift frequently into long periods of sleep. It was then that she began to dream of the Manor of Sleep. The manor appears in the dreams of those who have survived disaster and misfortune, and as Yoshino wandered into the mansion, she encountered Reika Kuze, whose cold touch caused Yoshino to fall into the Tattooed Curse. She began to wake up from her dreams less frequently, and she would experience pain, bruising and hallucinations while she was awake.

Eventually, Rei Kurosawa encountered Yoshino in the same Manor of Sleep. There Yoshino was extremely distressed, talking to herself and afraid to come into contact with anyone. She begs Rei to wake her up in the real world, and after learning of her identity, Rei visits her in the hospital. During her visit, however, Yoshino suddenly succumbs to the Tattooed Curse and disappears, leaving only black soot stains.

However, Yoshino's spirit remains trapped inside the manor and Rei continues to see her. She is tormented by shadows of her family gathering around her, and when approached she attacks Rei in fury. Yoshino becomes one of the ghosts that frequently haunts Rei's home, demanding to be set free from her curse and bewildered that Rei hasn't suffered the same fate.

In the Hour IX: The Unleashing chapter, Rei has the optional choice of confronting Yoshino, who has isolated herself inside the Partitioned Room. This choice is only available if Rei, with the help of Miku Hinasaki, has researched Yoshino, and if Rei receives the Notched Arrow Key from defeating Stroller Grandma.

Using the notched arrow key, Rei is able to enter a small passageway that opens to the room where Yoshino is. There, she can find a photo of Yoshino and her late lover, Naoya, that is crumpled from being tightly clutched. Yoshino then appears and attacks, leaving behind the Measure camera function when defeated.

Yoshino attacks by approaching the player in order to grab them where she also attacks alongside the shadows that torment her. The shadows can attack separately from Yoshino, pursuing the player and causing damage with any amount of contact. The shadows cannot be defeated permanently, as they disappear and re-appear until Yoshino is exorcised. Between her attacks, Yoshino teleports around the room, sometimes holding her head and sometimes suddenly disappearing to attack immediately afterward. 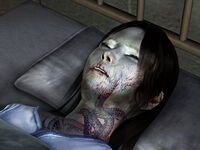 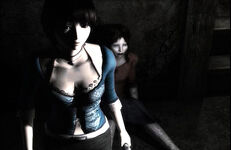 Rei finding Yoshino inside the Manor of Sleep. 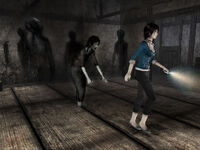 Yoshino and the shadows attacking Rei. 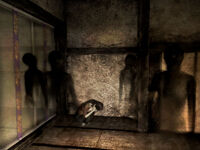 Yoshino tormented by the shadows. 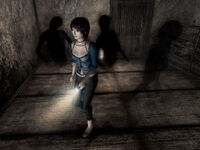 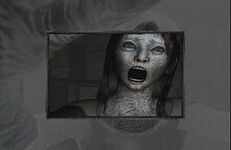 A shot of Yoshino showing the tattoos covering her skin. 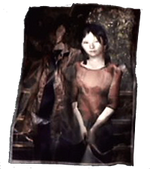 The photo of Yoshino and her fiancé. 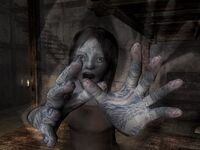